skip to main | skip to sidebar

Project Snow is my next robotics venture. After being fascinated by number of hybrid wheeled-legged robots I decided to design my own 6 legged hexapedal hybrid robot.

My previous robot was based on a PIC16F877A microcontroller and had limited environmental sensing capabilities. Its autonomous capabilities relied on an infrared ranging sensor to detect objects and avoid collisions. Its arm was retrofitted with an end-effector to pick up objects. However, the arm was manually teleoperated by a graphical user interface on a remote computer by means of wireless communications using peer-to-peer RF transceivers.

After being inspired by famous robots like the Big Dog from Boston Dynamics and Halluc-II - a Japanese robot, which boast advanced quadrupedal and octopedal locomotion respectively, I
started the design work on my next robot during the winter of 2007-2008, when we had record snowfall in Toronto, ON - hence the name for this project. 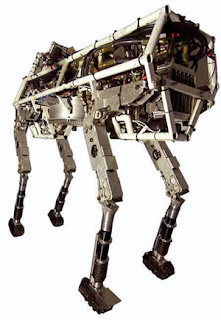 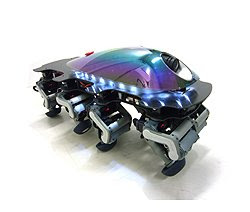 Highlights of Snow
System Overview
This robot will have an on board mini-ITX motherboard powered by an Intel dual-core processor running a custom software written in VB.NET and will use vision processing capabilities of Roborealm embedded in the VB application. The OS will be a stripped down version of Windows XP which will run on 1GB RAM. The low-level hardware access will be provided via a .NET micro framework environment.

Sensors
The robot will be endowed with fixed infrared sensors on its front, rear and sides to sense its environment. These sensors will act more like ears, reacting in real-time to intruders and obstacles in its path. These sensors will allow the robot to "listen" to its surroundings and the software will compensate to avoid collisions.

For vision, a 3 megapixel camera will give it imaging capabilities and with RoboRealm, the robot can be programmed to react to objects of different shapes and colors, as well as aid in navigation. The camera will be mounted on a turret to allow for 180deg pan angle and 90deg tilt angle.

Mechanics
The design of this robot will be hexapedal hybrid type. 'hexapedal' implies that the robot will “walk” on six legs similar to any hexapod insect. 'Hybrid' means that it will have leg and wheel combination. While the legs will give it the maneuverability to climb low profile objects or traverse uneven terrain, the wheels will give it the agility to react to sudden threats. While this may not exactly allow it to dodge bullets, it can, for example, move back quickly to protect itself from a slamming door or a charging dog and turn with within zero-radius.